Is your country boy like no other? Does he love hunting, wearing camo, and being outdoors? If he’s all that, then a ring that symbolizes his deep passion and love for the outdoors and hunting is the perfect anniversary gift for him. Show him how much you love and appreciate him by letting him show off the very essence of his being through a ring that screams out loud what’s in his blood! Not only should it look tough and rugged, it should also wear comfortably. It is your best chance at getting him to keep it on his finger. Go all out on his anniversary ring and choose something that speaks tons of what he loves best -- hunting!

Camokix knows just the kind of gift you need that will celebrate and renew your love and marriage to the hunter who captured your heart. We've come up with the following ring categories where we have our top picks for each category. These rings are the perfect gift for your rugged outdoorsman, that's for sure! 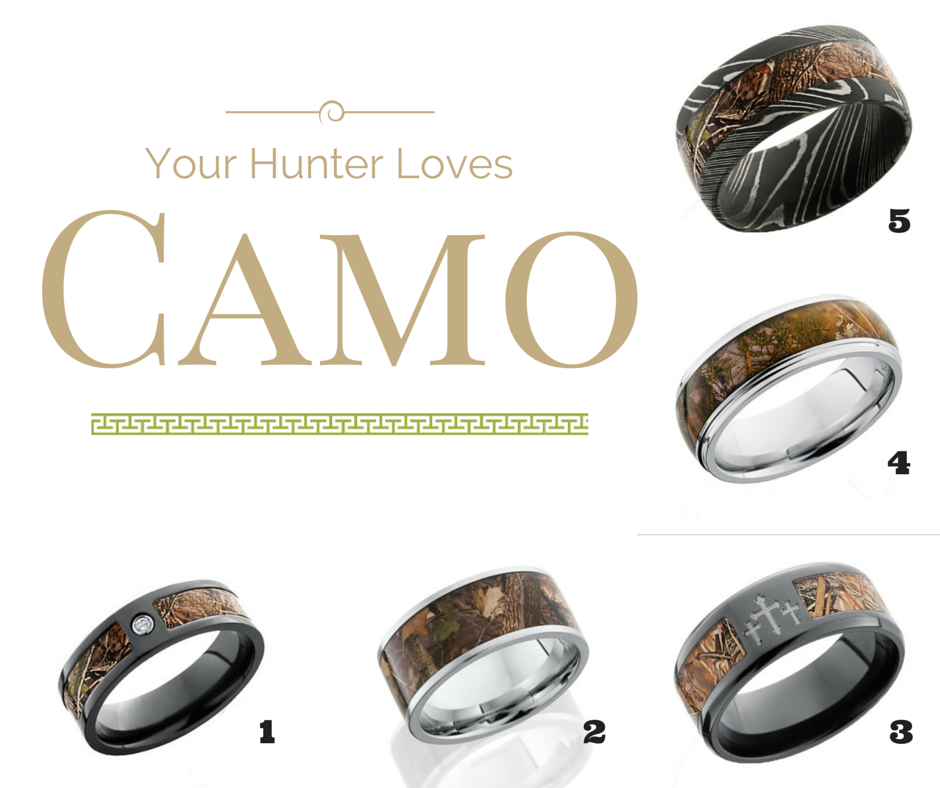 1. Camo Diamond Ring for Him

This awesome flat edged Black Zirconium camo ring has a gorgeous little 0.05 bezel diamond added to it. It is 7mm wide with 5mm of camo inlay (your choice of any of the 6 King’s Shadow camo patterns: Pink, Woodland, Desert, Mountain, Field, and Snow). Take note that the camo inlay will not be the same as seen on the picture because we can’t control the camo section you will get.

Here's a ring that's beautifully crafted for the most rugged of outdoorsmen who want to flaunt their camo pride. It's 10 mm wide with a full 8mm band of camo (biggest on the site so far) and it has a flat profile. It is shown in Cobalt Chrome with Kings Woodland camo pattern. However, you have the option to choose any of the King's camo patterns as well as the metal since we also offer it in Titanium and Black Zirconium too.

This 9 mm wide beveled Black Zirconium band boasts of being super scratch resistant and super lustrous. It has a 5 mm wide camo inlay which is customizable. You can choose one of the 6 King’s Camo patterns, namely Woodland Shadow, Mountain Shadow, Desert Shadow, Snow Shadow, Pink Shadow, and Field Shadow. One of the best things about it is that you can easily send it to any jeweler to be polished so it would always maintain it’s original shiny look.

If he practically lives and breathes the outdoors, and loves to hunt, this stunning 8 mm camo ring made of Cobalt Chrome with grooved edges is perfect. It's got enough camo to complement the hunter in him while still retaining that classy, elegant and romantic look a traditional wedding band should have. With this ring, you can choose your camo inlay. Pick any of the King’s camouflage patterns: Woodland Shadow, Mountain Shadow, Desert Shadow, Snow Shadow, Pink Shadow, and Field Shadow.

This ring is made extra wide with 10mm of Damascus Steel and a 5mm inlay of officially licensed camo. You have the option to choose whether you’d want the camo pattern in King's Desert Shadow, King's Field Shadow, King's Mountain Shadow, King's Pink Shadow, King's Snow Shadow, or King's Woodland Shadow. Pick one that best shows what you’re made of and what you love! 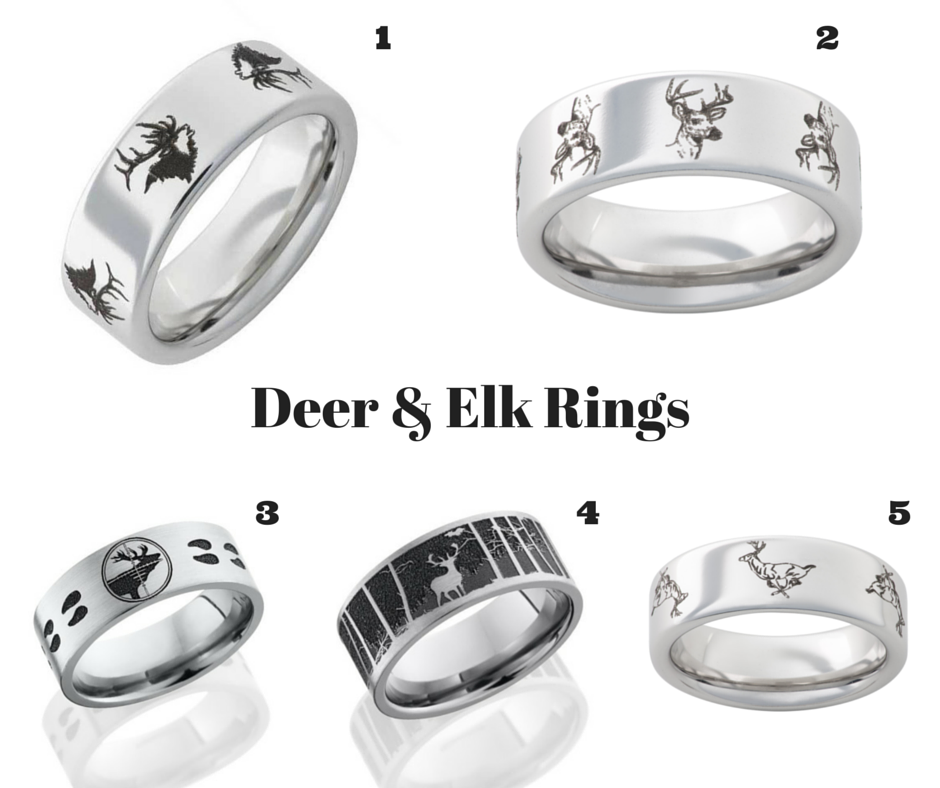 The entire 8 mm wide Vitalium band has elk heads all around. The pattern shows up brilliantly against the white metal band and is perfect for any outdoorsman who loves to hunt elk. Elk heads on this ring come all facing the same direction unless you make a note on your order to have them alternate.

This Vitalium deer ring for men is a wonderful choice for your hunter. It features a cool deer head pattern which shows up brilliantly against the white metal band. He will definitely love wearing it during his hunts. The entire 8 mm wide Vitalium band is super durable and scratch resistant. Deer heads on this ring come all facing the same direction unless you make a note on your order to have them alternate.

Your avid elk hunter will love this 8 mm flat band with an elk target design and elk tracks circling the band. It is forged with one of the toughest and lightest metal, Titanium. This ring will prove just how much you enjoy hunting and you'll want to take it with you on your hunting expeditions. You won't have to worry about scratches and bumps because it is built to be as tough as you and is guaranteed to last a lifetime.

This 9 mm flat band with a laser carved elk pattern and a mountain scene background will be your man's best piece of jewelry. He'll be able to take it with him during hunts since it's made with super durable, lightweight, and scratch-resistant, Titanium.

For country boys whose favorite pastime is hunting deer, this 8mm Vitalium band with running deer prints all around it is the perfect catch. It will be the talk of his hunting buddies and they’ll want one for themselves too. Your hubby will love you for picking out a ring that's true to who he is! 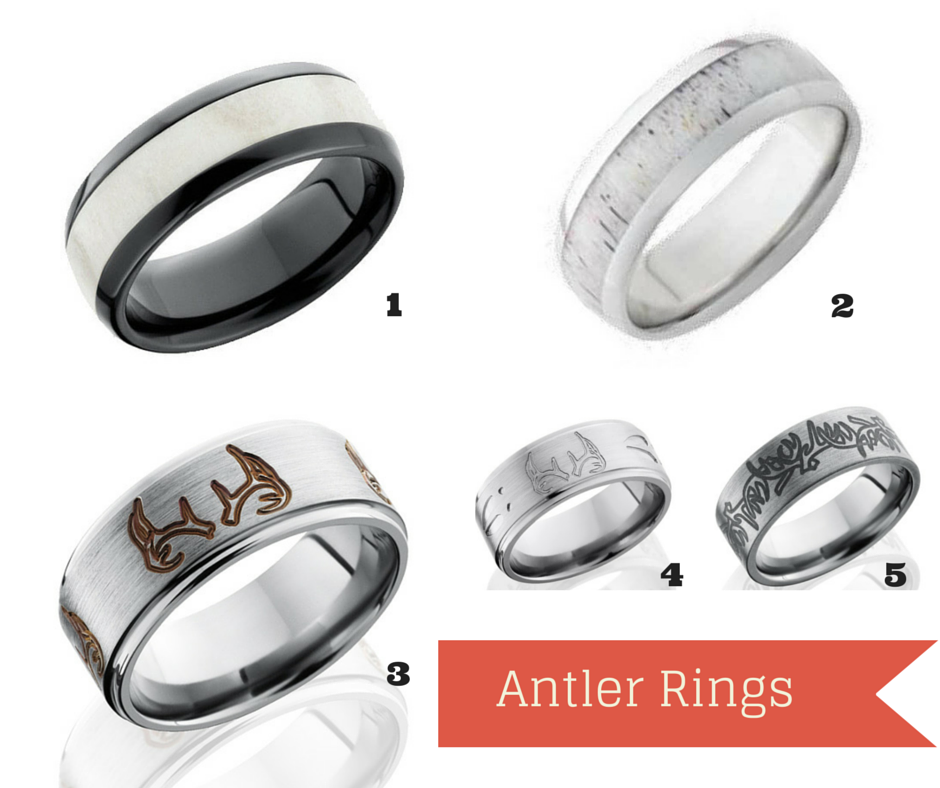 Since deer antlers are a hunter’s prized possession. Why not have it in his anniversary ring? It will remind him of the excitement and thrill of hunting. Combine it with Black Zirconium and you get one kick-ass hunting ring! What makes this ring very unique, is that this 8mm black ring has a 4mm inlay of real antler. We guarantee that it is genuine deer antler. Take note that each ring will vary from the image because it is custom-made for you.

Imagine having a reminder of your prized hunt around your finger -- awesome,right? Well, that's what this antler ring can offer. The 4mm of real antler inlay in this 8mm wide band is what makes this ring very special. We guarantee that it is genuine deer antler. Take note that each ring will vary from the image because it is custom-made for you. It's the perfect anniversary gift for your avid deer hunter!

A lightweight antler ring made of 8mm of Titanium is just what any deer hunter needs and deserves! It features a flat profile with grooved edges. The top has a satin finish while the edge has a polished finish. It has deer antlers engraved on all four sides. And since it's made of Titanium, it will be ultra light and very scratch resistant.

If your man just can't get enough of hunting deer and you want something that shows his deep passion for it, then choose this this is 9 mm flat band with grooved edges. It has a very detailed deer antler and tracks pattern engraved all around it. The top has a satin finish while the edge has a polished finish. Plus, you get to choose any of these three super durable and scratch-resistant metals: Titanium, Cobalt Chrome, or Black Zirconium.

This ring will definitely show his passion for the hunt. Made with lightweight Titanium, he won’t even notice it’s there. The satin finish makes it look even more rugged. This Titanium band features a flat profile with a pattern of repeating deer antlers that are laser engraved all around it. 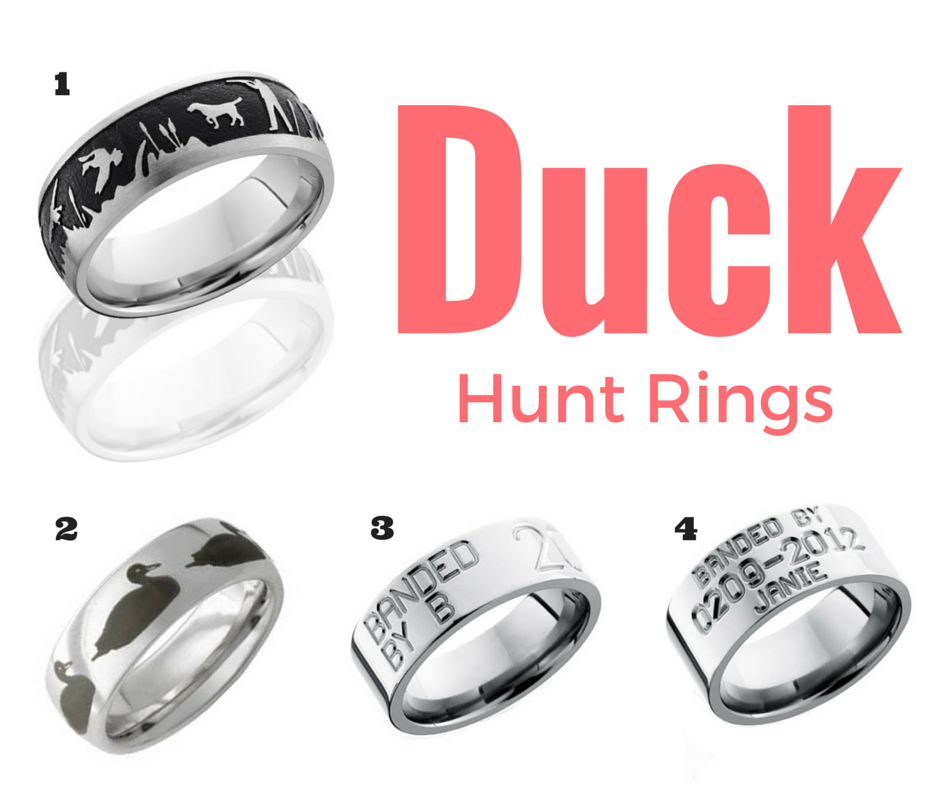 Here's a ring any duck enthusiast would love! This 8 mm Cobalt Chrome ring with a domed profile and a satin finish has laser carved details of a duck hunt scene all around it. The background has a black coat that allows the carvings to pop out nicely. It'll surely remind you of the number one thing you're passionate for -- duck hunting!

Here's a super awesome duck hunter band is meant for the man who hunts ducks like no other. This 8 mm wide Vitalium ring with a polished finish can be either a flat or domed profile, your choice. It also has a deluxe comfort fit which makes it very comfortable to wear. The duck pattern pops out because the metal used is more brilliant compared to most jewelry metals.

For the bonafide waterfowler, get him this super awesome 8mm duck band ring. He’ll love how it signifies his love for the outdoors, especially for hunting ducks. It will serve as a wonderful reminder of his greatest hunts. Personalize it to keep your greatest hunting memories (or a special date like your anniversary) close at hand. If you choose Black Zirconium, the carving reveals the silver below. It will be two tone, black on the outside and silver where the lettering is carved in.

Let him indulge in his passion for hunting with this wide duck band ring. Personalize the engravings to commemorate your anniversary with this cool duck band ring that's extra wide. Any duck hunting enthusiast would surely want this 10mm wide flat profile ring that has a polished finish. It wears comfortably even though it’s super thick. For Black Zirconium rings, the carving will show the inner silver layer, creating a two tone, black and silver effect. 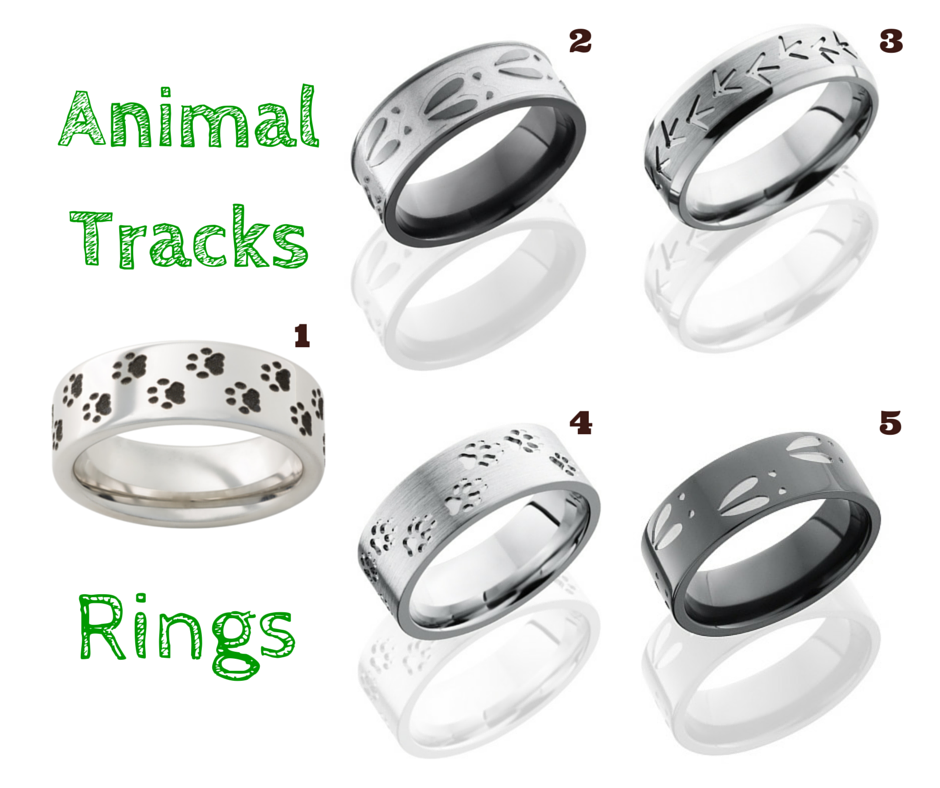 This hunting ring is sure to win him over with its super cool bear tracks design. This 8 mm wide wedding ring for men features black colored bear tracks all around that shows up brilliantly against the white metal band. It’s an extraordinary ring choice for your extraordinary hunter!

Hunting isn’t just a sport for you man, it’s a way of life. So get him this super cool black and silver deer tracks ring. The black pattern pops out nicely against the silver color background. It’s a unique wedding or anniversary ring idea. This 8 mm wedding ring features a flat profile with a pattern of repeating deer tracks. The deer tracks design are black and are raised on the metal and the edges are black too. The background of the ring is a silver color.

This 8mm super light Titanium turkey tracks ring will make a great anniversary wedding gift for your favorite turkey hunter. It has beveled polished edges and a satin top. It features a pattern of turkey tracks that are engraved all around it.

A guy like him who loves hunting in the wild or who loves trailing wolves would definitely appreciate a ring like this. It’s super durable so he can wear it no matter where he goes. This 8mm wedding band is carefully crafted from Cobalt Chrome and has repeating wolf tracks all around it. A cool ring for a cool guy!

This 8 mm black ring features a flat profile with a pattern of repeating deer tracks. The deer tracks design is carved on the metal so it turns out silver because it exposes the inner silver colored layer of the Black Zirconium ring. It is comfort fit that's durable and lightweight.

There are more styles on our website. Go ahead and check them out!

So let the hunt be over for the perfect wedding anniversary gift for your rugged outdoorsman. Surprise him with a ring from our selection! If he lives to hunt, he’ll love any of these rings for sure!